Milder temperatures meant that the snow specialists didn’t have their usual advantage this weekend, but that didn’t stand in the way of Østberg who was also experiencing the power and performance of his new 2016-specification Fiesta for the first time on loose-surface terrain.

Proving the extent to which he has progressed as a driver, the Norwegian adopted an intelligent strategy. Attacking the unfamiliar conditions with an air of caution through the opening speed tests, he and Fløene stayed well clear of trouble – ready to strengthen their position as their confidence grew.

Gaining assurance with each new kilometre, the Norwegians soon came into their own – setting a number of competitive stage times to consolidate a thoroughly deserved third place and allow Ostberg’s run of Rally Sweden podiums to continue unbroken with the Fiesta.

Having to adapt to a new team, co-driver, pacenote system and car, the Norwegian has had to acclimatise to a number of different factors but his progression has proved extremely encouraging.

Thanks to strong results at both Rallye Monte-Carlo and this weekend’s Rally Sweden, he and Fløene now hold third place in the drivers’ and co-drivers’ FIA World Rally Championship.

Away from the top flight there was further success for a number of M-Sport supported drivers.

Elfyn Evans and Craig Parry claimed their second successive victory in the WRC 2 category as their Ford Fiesta R5 Evo fought off competition from a number of Scandinavians. 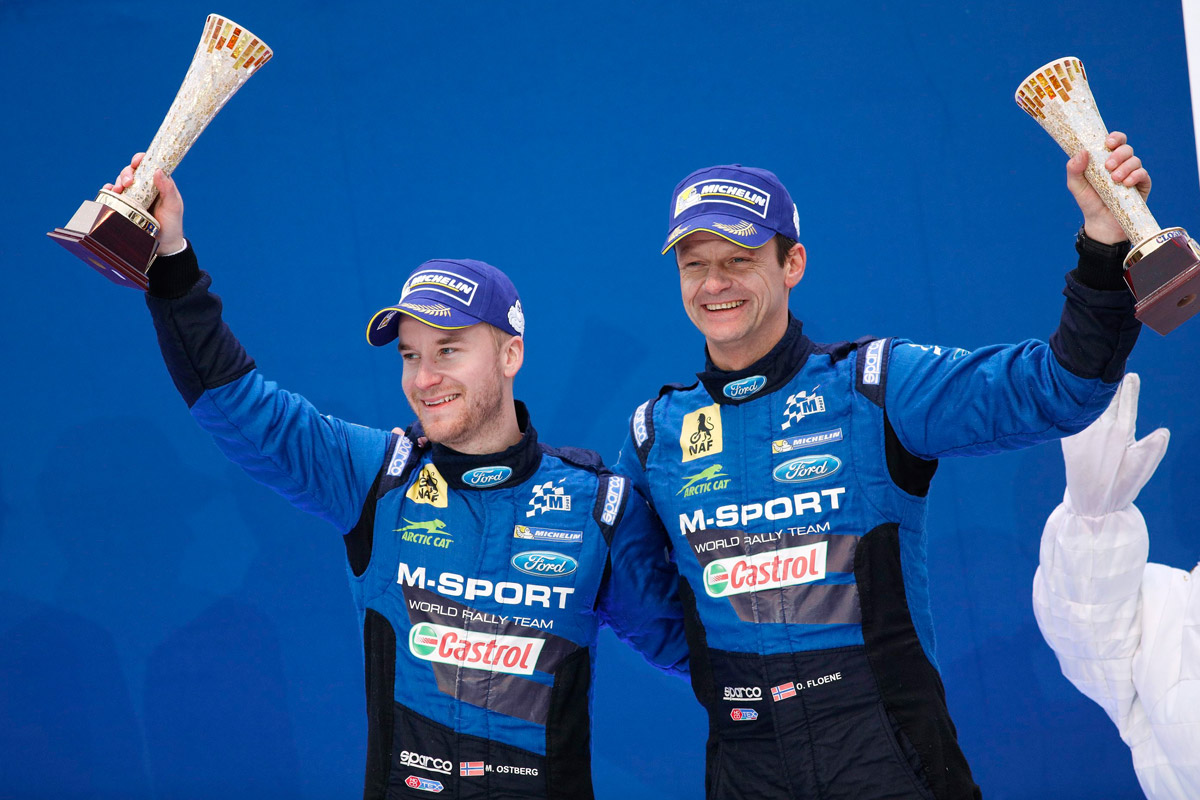 “It’s great to have finished on the podium here in Sweden – especially as I hoped my winter rally experience would give me a little advantage but I think it’s fair to say that probably wasn’t the case this weekend!

Everything is getting better and better and I think that we produced a good performance. It wasn’t the best of starts, but since then we increased our speed quite a lot. We pushed when we needed to and controlled the pace when necessary and in the end it was actually quite a comfortable third place.

“The relationship with Ola has been really good. We were actually saying that it feels as though we have been working together for years so that is a big positive and I think that everyone in the team is now really motivated ahead of Rally Mexico.

“This was very an important result for all of us and I have to thank the team for what has been a perfect car all weekend. Hopefully we can continue this level of progression and enjoy a lot more events like this in the future.”

“It was great to see Mads back on the podium. He and Ola have worked extremely hard and I am pleased to see how well their partnership is developing.

“They took an intelligent approach to this event. Knowing that their winter-rally experience would provide little advantage, they tackled the unknown with a level of caution and built their speed throughout the weekend. This was a fantastic result for them, and for the team, and I can see that everyone is really hungry for more!

“We also saw some brilliant performances from other Fiesta drivers further down the field. Of course Elfyn and Craig delivered another fantastic win in WRC 2, but it was also great to see the likes of Daniel Röjsel performing so strongly. This is Daniel’s home event and he has driven a faultless rally to take a commanding victory in the RC4 class.”