The Swedish fixture is classed as the FIA World Rally Championship’s only true winter rally but a mild winter meant that the conditions would not provide the snow-master with his usual advantage.

The Norwegian admitted to a somewhat hesitant start behind the wheel of his Ecoboost-powered Ford Fiesta RS WRC – familiarising himself on how best to tackle the changing conditions.

As the day’s action ventured into his homeland, the snow began to fall and Østberg’s strategy started to pay dividends – setting the third fastest time through both Svullrya 1 (SS4) and Röjden 2 (SS8) as he quickly climbed the timesheets.

In the sister M-Sport Fiesta RS WRC, Rally Sweden provided a big challenge Eric Camilli – experiencing his first winter rally on what is only his second competitive outing with M-Sport’s top-specification Fiesta.

Adopting a cautious start to judge the unfamiliar territory, he and co-driver Nicolas Klinger improved their pace significantly throughout the day.

Despite suffering a spin on the second pass of Svullrya (SS7), the pairing avoided the pitfalls that caught-out a number of leading crews and currently hold a creditable ninth place overall. 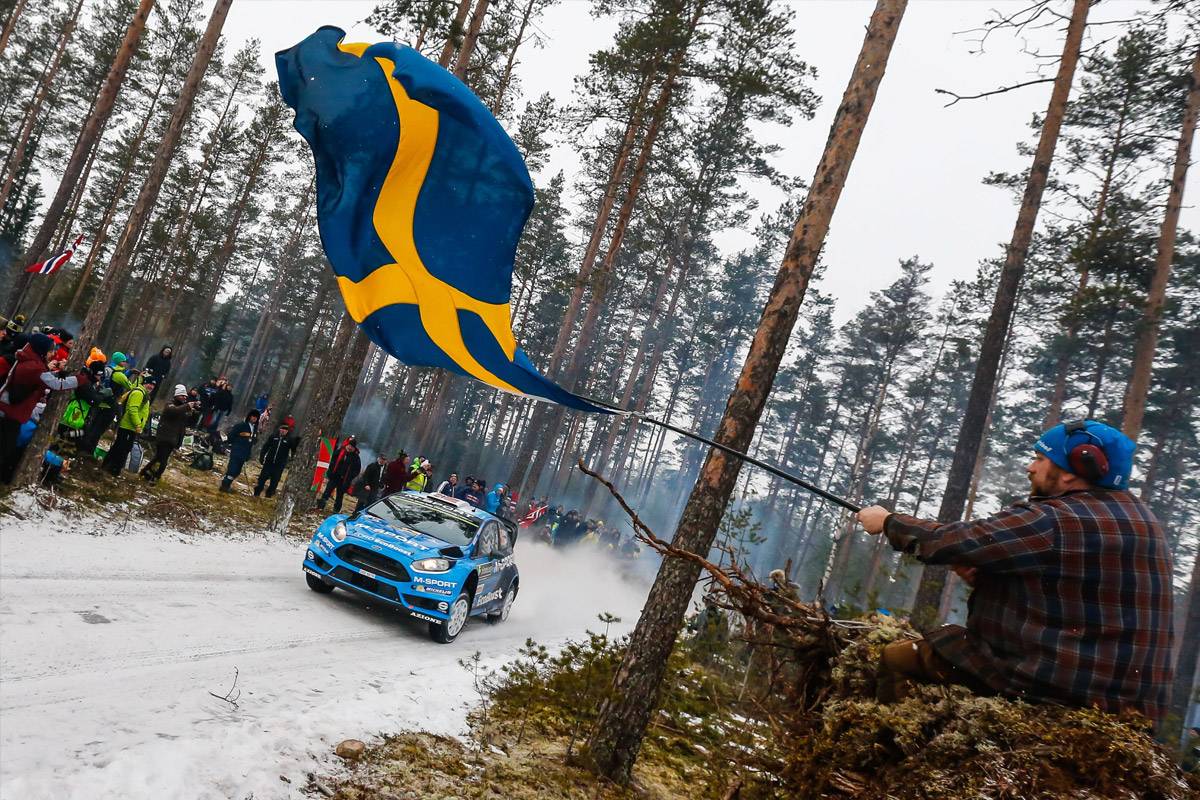 “This morning the conditions were quite difficult. We had a good ice base in some corners and gravel in others so it was very difficult to judge the grip and really attack the stages. I didn’t have the confidence to do that and we lost some time. It was a little disappointing not to have been in the fight from the beginning, but then the snow came and I was really happy!

“It’s encouraging to be in such an exciting battle for the podium and I will for sure push as hard as I can – regardless of the conditions. Of course if we have 10 cms of snow then that will make things more difficult as we won’t have a big advantage from our road position; but we will try. We’re fourth on the road and that isn’t so bad.”

“I’m happy to see the progress that we have made today. The feeling with the car was good and we have just been taking everything step-by-step and improving stage after stage. I think that was the logical approach for us to take given our limited experience and I’m happy to have shown some good improvements on what is my first experience of these conditions.”

“With five Ford Fiesta RS WRCs in the top-ten, it has been a really strong start for all of our Fiesta drivers. There’s a big battle for second place and it’s great to see Mads as one of the main contenders in that fight.

“It was always going to be a difficult rally for Eric. He took a very cautious approach to the first stages, but it was good to see the speed at which he was able to apply all that he had learnt and improve his times over the second pass.

“And of course, it’s always a pleasure to have Henning [Solberg] back in the team!”