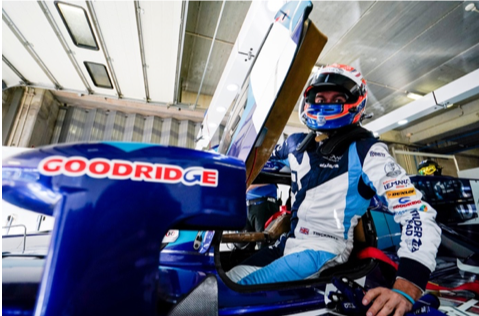 Goodridge is pleased to announce the continued sponsorship agreement with LMP sportscar star, Harry Tincknell, for the 2020 season.

This will be the fourth year Goodridge has sponsored the 2014 LMP2 Le Mans 24 Hours Winner, who is currently competing in the Asian Le Mans Series for Thunderhead Carlin Racing.

Harry’s 2020 plans also include the popular US based IMSA series; driving for Mazda Team Joest in the RT24-P. In 2019, Harry accrued two pole positions for Mazda, securing their first major international victory in Sportscars since the 787B won Le Mans 24 Hours in 1991.

In addition, Harry will compete for Aston Martin Racing at the prestigious Le Mans 24 Hours in the FIA World Endurance Championship; driving the #97 AMR Vantage in the FIA LMGTE Pro category. Another busy year for the 28 year old!

‘This is a strong and unique relationship, both Goodridge and Harry hail from Devon, UK, both exciting the motorsport world and enjoying global success. It’s with great pleasure that we continue to partner with Harry on his racing journey’.

“When we realised Harry had been successful in securing his position with Mazda Team Joest, in the US based IMSA series for 2020, it was an absolute must for us to find a way to work together in growing the Race business in North America”.

‘I’m very proud to partner with Goodridge for the 2020 season. It is a very exciting time to be involved with the Goodridge brand and I look forward to celebrating ongoing success together around the world”.

One of the most exciting talents currently in sportscars following success in single-seaters, Harry has quickly carved out a promising career on the world stage in just three years.

Having secured pole-position in his first-ever sports car race in 2014, Harry scored a debut Le Mans 24 Hours LMP2 race win. His maiden LMP1 race came at Le Mans in 2015 having been selected as a Nissan NISMO “factory” driver. He won the 2016 European Le Mans Series title and with Ford Chip Ganassi Racing achieved runners-up in the FIA LMGTE Pro Teams’ Endurance Trophy of the FIA World Endurance Championship in his first full season going on to give the ”Blue Oval” 4 wins in the World Endurance Championship. In 2019 Harry was at the wheel when his factory Mazda Team Joest RT214-P crossed the line first giving Mazda their first win on the international stage since winning the Le Mans 24 Hours in 1991.

Ambitious, fresh and undeniably talented, Harry is a mature, confident sportsman and extremely passionate about his driving career.