Following on from a dominant performance at last month’s Rallye Monte-Carlo, M-Sport came to Sweden for a repeat performance.

Given the strong level of competition, victory would be hard-fought, but Evans controlled the event from start to finish – claiming victory over a number of drivers who are considered specialists on the region’s unique stages.

Pushing when confident, he was able to establish a good lead that allowed him to back off the pace and consolidate his position through the event’s closing stages.

Never fazed and fully under control, this has been one of the Welshman’s most impressive performances to date – demonstrating the capacity to manage his event amidst some very strong competition.

In the second M-Sport Fiesta R5 Evo, Eyvind Brynildsen suffered some set-up issues over the course of the weekend but he and co-driver Anders Fredriksson climbed the timesheets to finish the event in a creditable fifth place.

The pairing also secured the coveted Colin’s Crest Award – launching their Fiesta R5 Evo a huge 45 metres through the air. Eclipsing all of the world rally car entrants and securing a new Rally Sweden record, their performance highlighted the strength of the new Ecoboost engine.

This weekend also saw some strong performances from a number of privately entered Fiesta R5 Evos. Fredrik Åhlin posted a stage win and led the event on Friday whilst Anders Grøndal battled illness only to be beaten to the final podium position by Esapekka Lappi on the last stage. 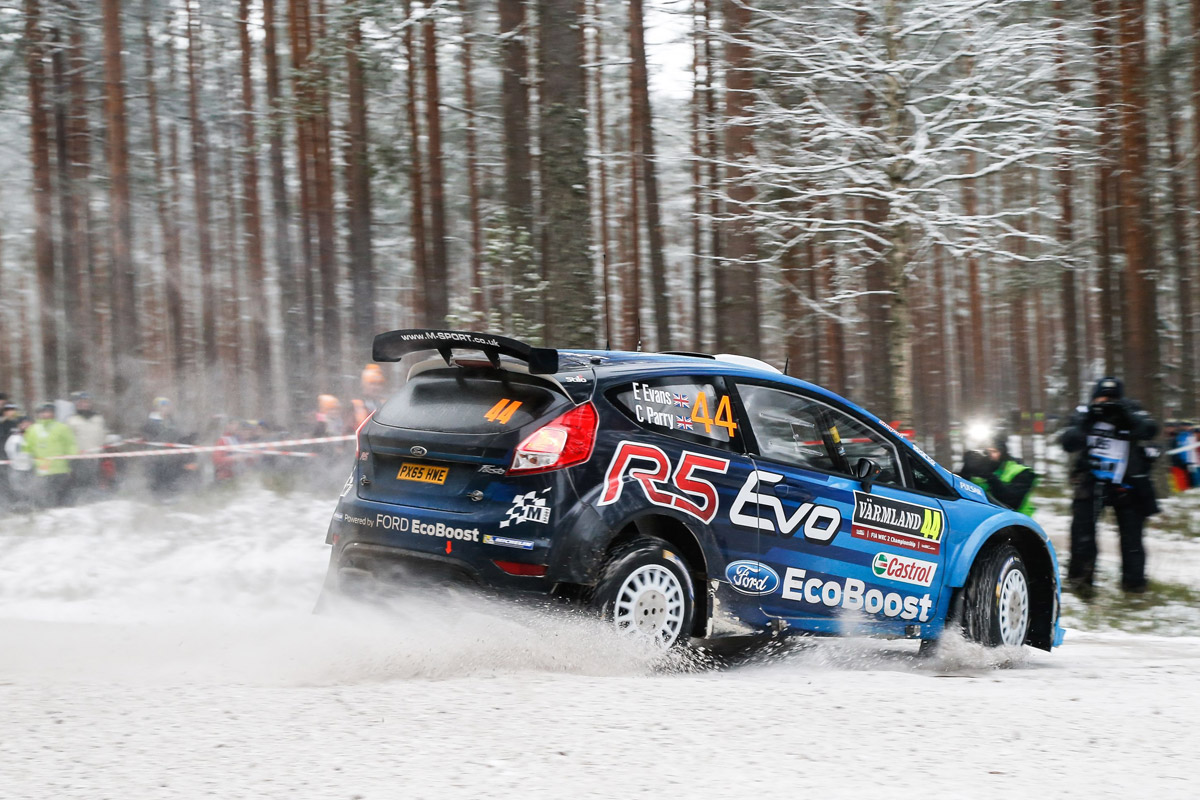 “Coming to Sweden, we knew that we had a chance of victory but we also knew that it would be a big challenge – which it was! To have done what we came here to do is fantastic and we’re all really pleased with the result.

“We had a big battle with Fredrik [Åhlin] and Pontus [Tidemand] on the first day but we managed to get the measure of them and then controlled the rally from there. We pushed hard when we needed to and took care with some issues once we had established a good lead on Saturday.

“This has been a great event for us and it was good to see that we were able to control the pace and come out on top.”

“Everything was working really well today. We had a good run through the Power Stage and I think we proved that we have the speed. Unfortunately this weekend wasn’t for us, but we’re more motivated than ever and we’ll come back fighting even harder!

“It was also really nice to get the record on Colin’s Crest yesterday – and it only took me 45 metres to gain a lot of new friends on social media! That will be a really special memory for me and I hope we did Colin proud.”

“We came here to win. We knew it would be difficult given the high level of competition, but the combination of Elfyn and the new-evolution Fiesta R5 has provided us with a fantastic victory this weekend.

“I had said that Rallye Monte-Carlo was his best ever drive, but I think he might have surpassed that here. He controlled the event from start to finish and out-performed a number of crews who are specialists on these unique stages.

“It was also great to see Eyvind secure the record on Colin’s Crest – something I don’t think many thought was possible with an R5 car – and to see so many privately entered Fiestas performing so well.

“With six Fiesta R5 Evos in the top-ten, we have proven how competitive our package is and I’m looking forward to more close battles over the course of the season.”