EVANS LEADS THE WAY IN WRC 2

Piloting the new-evolution Ford Fiesta R5, the Welshmen started the day with the fastest time through Fredriksberg (SS10) and then set about preserving his lead through the remaining speed tests.

As was the case at last month’s Rallye Monte-Carlo, victory would be hard fought. Facing tough competition from a host of experienced Scandinavians, Evans was also forced to get his hands dirty when repairing a mechanical issue.

Suffering a damaged steering arm, he and Parry had to make a roadside repair. Thankfully, the crews’ technical knowledge combined with the strength and serviceable nature of the Fiesta meant that they were able to keep the time loss to a minimum.

Holding a 17.9 second lead over Škoda Motorsport’s Pontus Tidemand, Evans will be looking to bring home a second consecutive victory when the event concludes with tomorrow’s final stage.

In the second M-Sport Fiesta R5 Evo, Eyvind Brynildsen has been making his way up the standings. Despite suffering the same set-up issues he faced during the first day of competition, he and co-driver Anders Fredriksson climbed from eighth to fifth place overall.

Setting the third fastest time through the first stage of the morning (SS10), the pairing proved that they had the pace to challenge for the top positions this weekend.

What is more, the Norwegian/Swedish pairing also secured the coveted Colin’s Crest Award – launching their Fiesta R5 Evo a huge 45 metres through the air. Eclipsing all of the world rally car entrants and securing a new Rally Sweden record, their performance also highlights the aerial dominance of the new-evolution Fiesta. 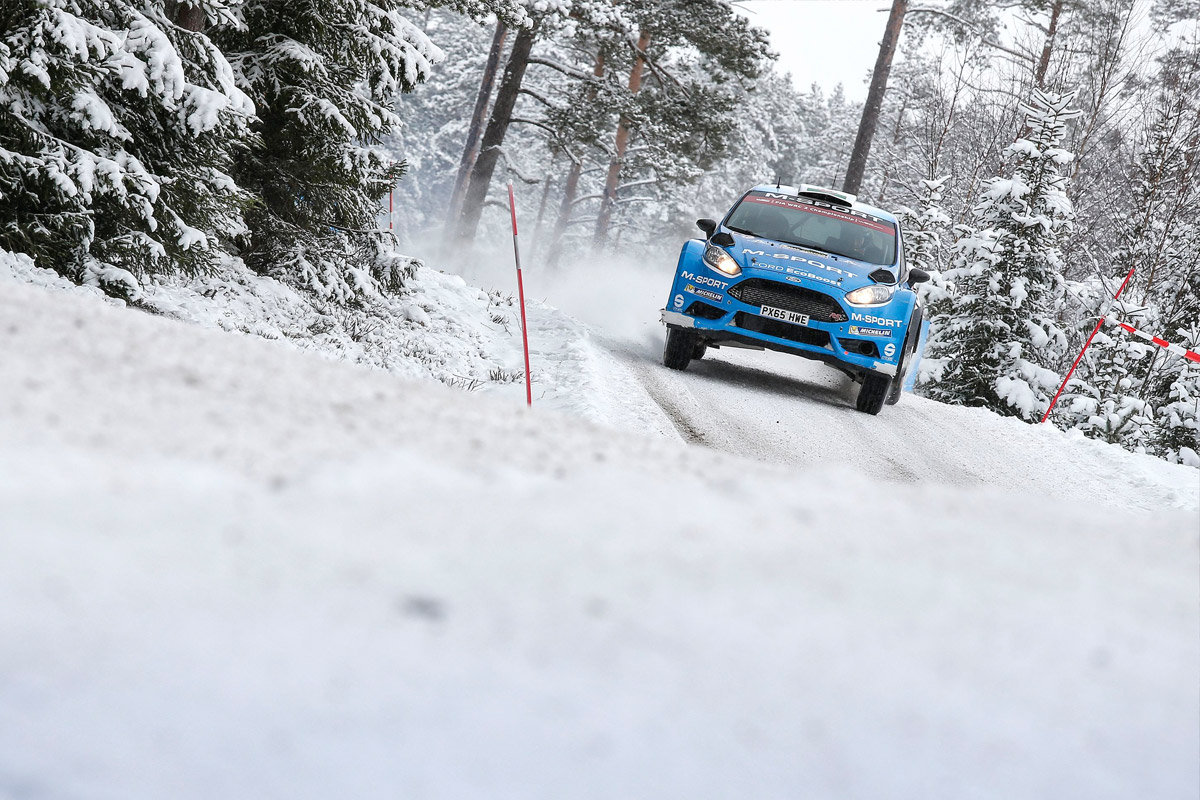 “The day started really well for us with a strong time through the first stage [SS10]. Pontus [Tidemand] managed to take a bit back on the second one [SS12], and then we had a problem with the steering towards the end of the third [SS14].

“I wasn’t sure what it was at the time but there was a strange feeling inside the car and we definitely lost some seconds there. We managed to find the problem and make a temporary fix on the road section, but I wasn’t feeling 100 percent comfortable with the way the car was driving after that.

“Pontus has driven really well today, but we’ve also had a few little issues so if everything goes to plan then we should have a big enough margin going into tomorrow’s final stage.”

“It feels as though we’ve been experiencing the same issues that we had yesterday. It depends on the character of the road. Generally the first half of the stage is not too bad but then it feels as though we are losing communication with the rear of the car and it’s really hard to find the grip.

“But that’s just the way that it is. We are trying to push really hard and I think we have proven that – with the feeling perfect – we would have had the pace to challenge at the top.

“It was also a nice little bonus to get the longest jump on Colin’s Crest. I actually heard that Thierry Neuville [the previous record holder] didn’t believe that the Fiesta R5 could go that fast, but he can join me for a ride if he is unsure! It just goes to show that the engine on this new Evo is really strong!

“We had a perfect combination of corners before the crest and I knew that we had quite a lot of speed. I decided before the stage that if everything went to plan then I would try to break the record. I just put my left foot on the pedal and held it down. No drama!”

“It’s been another strong day for us in the WRC 2 category with six Ford Fiesta R5 Evos occupying the top-ten. Elfyn has driven brilliantly once again and if he can pull this one off tomorrow then it will be a massive win for both him and the team.

“It was also fantastic to see Eyvind secure a new record on Colin’s Crest. I’m sure a lot of people in the service park didn’t think it could be done with an R5 car, but that just shows the performance and the strength that we have been able to extract from this new evolution.”