Having won three out of the six stages, the Welshman has carried on where he left off from last month’s Rallye Monte-Carlo – an impressive feat given the strong Scandinavian entry whose familiarity with the event has made them the ones to beat in recent years.

Other Fiesta R5 Evo drivers performing well include Fredrik Åhlin and Anders Grøndal. Åhlin had held the lead after an inspired run through the first pass of Röjden (SS3) and now holds second place ahead of Grøndal.

Unfortunately, Eyvind Brynildsen was unable to show his true potential following issues with the car-set-up. With no mid-day service, the Norwegian will be keen to show what he could have achieved when the event reconvenes tomorrow. 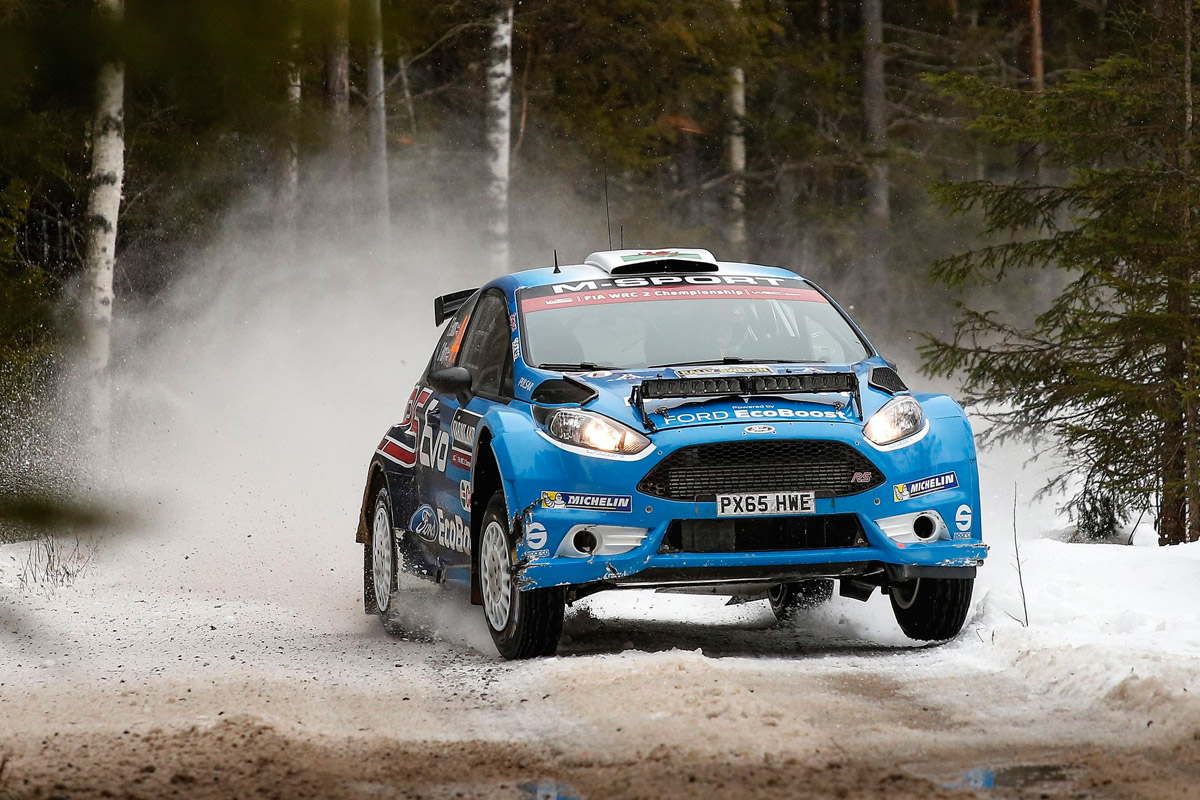 “We’ve had a really good day. It’s tough out there and I think everyone has been pushing really hard – myself included! The times have been a little up and down in places and I felt that I had more to give on the second stage this morning [SS3]. There was very changeable grip in there and it was difficult for me to read the road given my limited experience at this event, but it certainly got better after that. We’ve just been trying hard and really enjoying the driving.”

“Unfortunately we had an issue with the rear of the car today. We’re not sure exactly what caused it which was really disappointing because this engine is amazing and I think we had the speed to have been challenging at the top. But it’s been a clean run with no mistakes and tomorrow is another day so let’s see what we can do then.”

“After such a strong performance at Rallye Monte-Carlo it’s great to be able to continue that trend at a totally different event; and to hold a one-two-three at the end of the first day is fantastic.

“Elfyn has done another incredible job, which is all the more impressive when you consider that this is an event on which the local drivers have traditionally dominated. We’ve also seen strong performances from a number of our customer cars with Fredrik Åhlin and Anders Grøndal just a handful of seconds behind.

“There’s still a long way to go and we know how high the level of competition will be, but this is a fantastic start.”

“We tried to push on the first stage [SS10] but I had a fairly big wakeup call almost immediately. We had a big moment only about one kilometre into the stage and actually went off the road so we were really lucky. Then a couple of kilometres later I hit a rock so it was time to calm down a little bit after that!

“We then had a really good feeling for Vargåsen [SS12]. We had a good run in there and I was very happy with that. Hayden [Paddon] is driving really well and his road position means that he is going to be very hard to beat, but a podium is definitely possible and that is what we will keep pushing for.”

“The first stage this morning [SS10] was good – not perfect but pretty good. On the last one [this morning, SS12], I knew that we would drop some time. I didn’t feel as though the rhythm had quite clicked in but we had new tyres on the front and used on the rear so that might have contributed to that.

“The main thing is that the lead is still intact and it would be silly to do something stupid now. Having said that, we still have to go hard to ensure Pontus [Tidemand] doesn’t claw back any more time.”

“I’m pushing really hard but I feel as though we’re still struggling with some of the same issues we had yesterday. The car just doesn’t feel the same as it did last weekend [at Rally Finnskog] so that is something we need to understand.

“We’ll keep going and we’ll keep pushing. It’s just a shame because I think we could have had a great fight for the top positions this weekend.”